I'm back...my 12 day trip has left me feeling 10 times more tired than before i left (and i was completely knackered then)...but it's also left me feeling 100 times more relaxed. Which is a good thing as i was wound up like a really, really wound up thing before. Even saying 'serenity now!' did nothing for me. What i clearly needed was a 10 day alcohol assisted trip down memory lane and a good catch-up with some old friends.

So first stop was Mendoza. I've always loved Mendoza, it's such a cool little city, chilled out, great people, incredible looking girls (although i obviously averted my eyes any time one walked close by) and one of the best open air bar-restaurant streets anywhere in the world. I must have been over 20 times during the last 4 years (Lore and I used to meet there when i was living in BA and she in Santiago) and i've got some friends there so it was great to see them again.

The trip from Valparaiso is pretty scenic, as the bus whizzes past some gorgeous country and mountain views. Then comes the cool bit as you rise all the way up to something like 3400m to cross the border at Los Libertadores. Here's the series of switch-backs on the Chilean side. The Argentine side is just a straight road all the way to Mendoza. 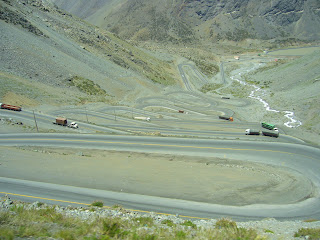 As i was going on this trip on my own, Lore asked me to take along the pet llama she adopted when we were in San Pedro recently. Named Neruda after some little known Chilean poet, he was pretty good company when i actually remembered to take him out of his travel bag. Here he is in Plaza Independencia. 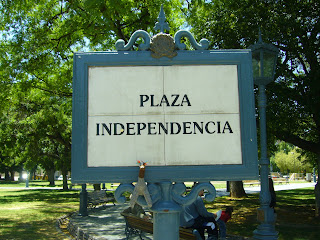 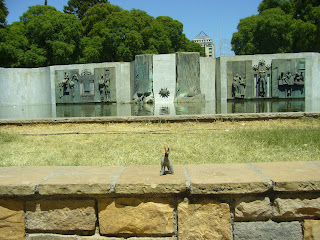 So i can't really go into much more detail about what i did in Mendoza apart from: Thursday, meal with old friend followed by a couple of beers on Aristides Villanueva (the aforementioned best bar-resto street anywhere with about 12 blocks solid of good bars, good restaurants and, on the 2nd weekend in December, loads of recently broken up school and university students out on the lash creating a really great and fun atmosphere). Friday, back to Aristides. Saturday, a hungover meet up with Graham, an old travelling friend who settled down in Mendoza a couple of years ago and is now well and truly ensconced with a wife and a 7 month old baby. Graham's surname is 'Cooper' so, being English, he couldn't resist calling his baby Tomas 'Tommy' Cooper. Most likely because he made the baby 'Just like that.' Here's a photo of Tommy with Neruda. Not the best photo, mind, as Neruda doesn't like kids and he was itching to get away. It was one shot or nothing. We then headed back up to Aristides. Then on Sunday i got the bus to Buenos Aires. 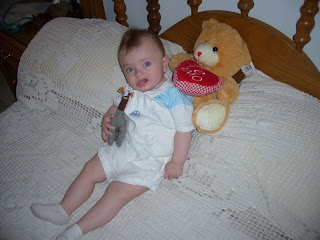 As an end note, one of the things i used to really love about Mendoza was its peacefulness. There was virtually no crime or fear of crime. That's completely changed now as the city attracts more and more tourists (carrying passports, credit cards, cameras etc) and also as the local population gets rich off both tourism and viticulture (wine making to the less, er, clever of you out there). There's a real edge about the place now as it's very obvious that there are people eyeing you up to see whether you're worth robbing. I was sitting reading the newspaper on Sunday afternoon at a quiet outdoor cafe (i was reading about how 2 Argentines had been robbed in broad daylight in the city centre with police around just after taking money out of the bank) when there was a bit of a scuffle behind me. Two Frenchwomen were kicking the shit out of a kid who had tried to snatch their bags. He got away, but he got a good beating for his trouble. In the newspaper there was also a report about how an undercover policeman dressed as a scabby backpacker shot dead a wannabe thief on the walk up to Cerro La Gloria, a walk that used to be completely safe to undertake but is now not recommended. Take a taxi up. This is all a real shame as it takes away a lot of what i used to like most about being in Mendoza-not worrying about crime.

Next stop for Neruda was Buenos Aires. My trip report from there might actually be a bit more interesting. God i hope so.
Posted by Matt at 19:48