When thinking about the foreign influence in Valparaiso during the 19th century, it’s easy to just have a look around the city and see it everywhere. It was the British who really helped drive the city forward as it was the British who were most involved in commerce in Chile for over 100 years. Chile, during much of the 1800s was, to all intents and purposes, a de facto colony. We may not have conquered it by force (although we did fire the odd warning shot in the 18th century) but Chile was almost entirely dependent on Britain economically.

It was Thomas North, the Nitrate King, who pretty much ran the country due to his financial strength. North’s going to get a whole post to himself some day soon, but suffice to say that he built the entire railroad system north of Santiago and poured millions of pounds into the development of Chilean infrastructure over the period of about 30-40 years. He’s a controversial figure and almost completely forgotten in Chile due to the fact that he was a an out and out capitalist and most of the profits he made were taken out of Chile and given to his shareholders and to himself. This obviously didn’t really sit well with a lot of Chileans who would have preferred for the money to stay in Chile. He's also quite controversial as he's been frequently cited as a cause of the war between Chile and Peru which saw Chile expand its territory by over a third and North become the most powerful man in Chile due to the fact he laid claim to pretty much the entire conquered territory and then proceeded to mine it to within an inch of its life.

The British built much of Valparaiso: most of the funicular lifts still bear the stamps of British iron-works, the most upmarket Hill (Cerro Alegre) is full of Victorian mansions and used to be called Mount Pleasant (Alegre means ‘happy’). Cerro Concepcion (essentially part of Cerro Alegre) has the Iglesia Anglicana which has not a word written in Spanish inside and which has a monster organ donated by Queen Vic herself. Cerro Concepcion also has the Paseo Atkinson and Calle Templeman. There are so many examples of the British influence in Valparaiso and it's going to get a full on posting soon so I can’t be bothered to talk any more about it right now. Just take a look at the photos and the newspaper adverts. 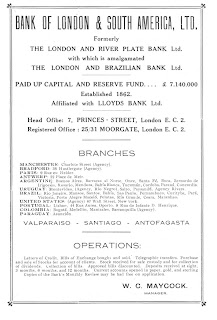 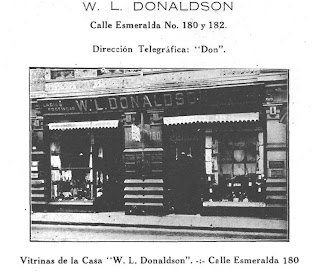 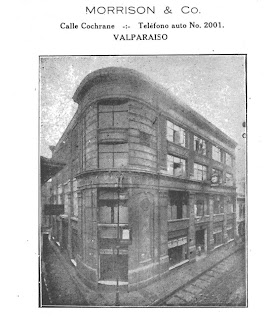 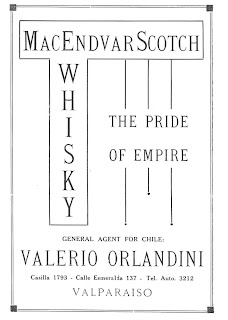 However, it’d be wrong to suggest that the British were entirely responsible for making Valparaiso one of the most important cities in South America. The city was the most important port in South America and, as such, was home an enormous mix of nationalities. Germans were influential in the forming of the city. Cerro Concepcion was the German enclave as well as the British one (we got on rather well in the old days; not surprising as our entire Royal Family is descended from the penalty shoot-out kings). The Iglesia Luterana is just around the corner from the Anglicana.

There were also large numbers of Italians, French and Americans doing business and living in Valpo. Eastern Europeans also played a part in the develpment of Valparaiso along with the original inhabitants of Spanish descent already living in the city when the immigrants started to arrive in large number. I think the best way to demonstrate this is by looking at the modern day Fire Department.

There are 15 ‘Companies’. Let’s take a quick look at each one. If the words bore you, you can at least have a look at the cool insignia that each Company has.

This was the first fire corp and was set up by a mix of British and American volunteers in June of 1851. It attended its first fire a week after its inception. Its first Captain was a Mr R Heathly.

Also founded in June of 1851, this was obviously the German Fire station. It’s first Captain was Herr Otto Uhde.

Founded in October 1854 this company was named after its two main benefactors and two of the richest men in Chile. Edwards and Cousino are still big names here.

Founded by the Spanish residents in Valpo in January 1865, this company was also known as La Espanola. First captain was Sr Pedro Billa

This was the Italian fire house and was founded in January 1856. Its first Captain Antonio Gotelli died in active service in 1862.

Founded in August 1893 by another group of Spaniards and whose first Captain was Don Enrique Campusano.

This company was another French one but differed from the Fifth because the volunteers considered themselves Franco-Chilean and not just French. It was founded in June 1856 and its first captain was Antonio Duprat who I assume was related to the first Captain of the Fifth. 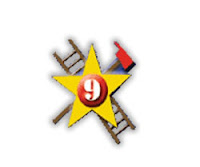 Founded in January 1858 by a group of native citizens. First Captain-Domingo Montalva

Founded in June 1851 and with a first Captain Sr. Josué Waddington. I can’t find any info s to why it’s now called the ‘Chileno-Arabe’ Company although my guess is that it’s due to the fact that Chile houses the largest Palestinian population outside of the Middle-East. 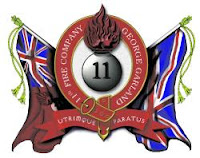 Founded on the 13th September 1901 this is another British Company and named after the founder of the Valparaiso Fire Company. Its first headquarters was the Iglesia Anglicana on Cerro Concepcion. It’s first Captain was Mr John Keil.

I'm not sure about the French, Spanish or Italian fire stations, but both the British and the German ones have fire-trucks donated by their 'home' countries. There's a 20 year old British fire-truck in the 11th station and two German trucks in the 2nd. It's good to see they're keeping the history alive.

So that just goes to show what a melting pot Valpo was back in the day. What's great is that after so long being ignored, Valparaiso is again receiving a significant amount of foreign immigration. The tourist and culinary industries are booming and they're being helped along by jonny foreigner. Brilliant.
Posted by Matt at 18:50

International fire brigades... that's very cool. As you know, we only have hospitals & "clubes" here in BA. I'm still waiting on the food influence. When I can get decent Thai, I'll be a happy camper.

i know, the fact that they still keep the links going is what surprised me. usually these kinds international organisations are pretty much in name only now so it's nice to see that the different brigades are proud enough of their origins to keep things going.

after a bit more research, it turns out that both the 5th french and 6th italian brigades also have donated trucks. The italian one is green.

As for decent thai food in BA, the only one i ever heard of was Empire. Quite nice but not particularly authentic and probably charging 40 pesos a dish nowadays.

The thai place we have just around the corner here in Valpo is next on my list to try...

Matt, Enjoyed your photos of the Disidentes Cemetery. Before you think me strange, I do family genealogy and recently learned that my 2nd cousin 5 x removed emigrated from Scotland to Valparaiso. Found that he and his wife did make a few trips back to England. Will I didn't find any family members mentioned, did notice the couple from Greenock, which is where my guy was from. Another of your photos did give me a idea of where to check for information for this family member, he might have been a Free Mason! Regards, J. Dufault, New Hampshire, USA

Hi Julie-what was the name of the family member? I've most likely come across it either in the cemetery or in one of the documents about the British in Valpo. Let me know and I might be able to find out more info...

Trying to get info on relatives living in Valparaiso in 19th Century,

Can any one help!

Penny-do you know when they died? If so I could go check in the cemeteries and see if i can find their graves...

I'm guessing William Cubby Williamson was part of the family that opened the Williamson, Balfour Company which lives on today as a BMW dealership...

I'm in contact with Penny & we have a family connection with Welsh couple Wharton Peers Jones (b 1850) & his wife, Mary Owen (b abt 1866) who settled in Chile. All I know so far appears on my website (it starts at www.owen.cholerton.org/05_elias_62.php). Can you add anything more about them or about the others referred to on the site who headed your way? You can contact me via my site.
Many thanks.