Isn't Summer lovely? I just got back from Quito, in Ecuador, where the temperature rarely gets above 20C due to the altitude. Quito is the world’s second highest capital city at more than 2800m above sea level. Actually, it’s officially the highest; its contender for the title is La Paz, in Bolivia, at more than 3600m but La Paz is only the de-facto capital of Bolivia. The official capital is Sucre.

La Mariscal, or Gringolandia (as it’s where all the backpackers congregate), has completely changed. I lived in the barrio for more than 3 months and, although I had a great time, there weren’t very many bars or restaurants of any decent standard. Now, it’s been completely redeveloped and has loads of cool bars, restaurants and boutique hotels. It all looked really nice. If if weren't for the fact you constantly feel that someone is going to rob you with some kind of loud or pointy weapon, it'd be a really nice part of town.

And Quito’s UNESCO World Heritage Centro Historico is even more magnificent than before. It is truly an amazing place, renovated, cleaned-up and stunningly beautiful. Ecuador, compared to Chile, is under-developed, poor and horribly corrupt. But it has Chile completely beaten when it comes to historical preservation. Chile, and particularly Valparaiso, should be ashamed and embarrassed by its absolutely pathetic mismanagement of its architectural heritage. This country is painfully lacking a cultural conscience. It’s changing, but far too slowly and it’s going to be too late for much of Chile’s most beautiful architecture. It’s time the government stopped passing the buck to private investors (where no profit means no project) and got involved in safeguarding Chile’s heritage for future generations. If less well-off countries like Ecuador, Colombia, Peru and Bolivia can do it, Chile should be able to. I doubt it’ll happen though- most people here just don’t care.

One of my favourite things in Quito when I lived there was climbing one of the Basilicas. In most other countries, you wouldn’t be allowed to get anywhere near where you can in this one…namely, to the very, very top of one of the bell towers. You start off at ground level and take a normal staircase for three levels. At each level there are panoramic views of the Centro Historico. At the third level, you then take a small spiral staircase to the clock tower. From the clock tower, you take a homemade metal ladder to the next level, another ladder to the next level and finally, another ladder up to the very highest point in the tower. The views are spectacular, obvio.

And then you go back down to the third level, cross a narrow and fairly unstable wooden bridge across the roof of the nave to the Basilica’s spire, where you take a couple of steep ladders/staircases to the viewing point. Awesome. 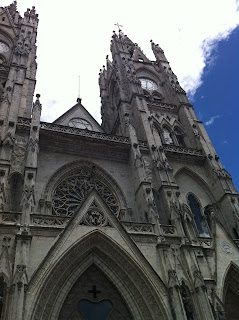 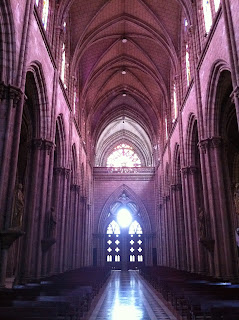 The basilica is still unfinished... 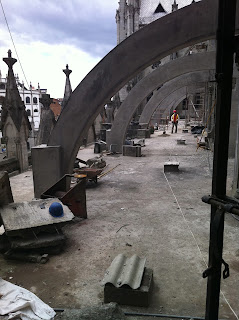 Inside the clock tower: 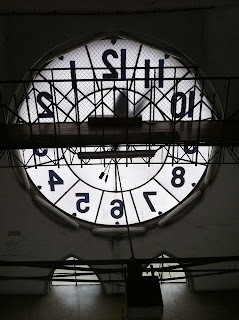 Views of El Panecillo and the rooftops of the Centro Historico from the clock tower: 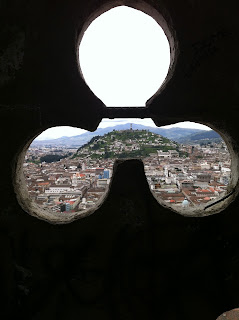 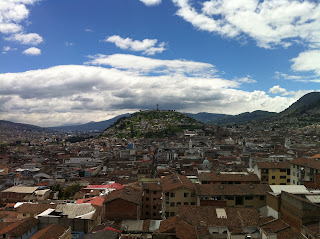 View of the spire from the high point of the clock tower- you can get up to just below the top of it... 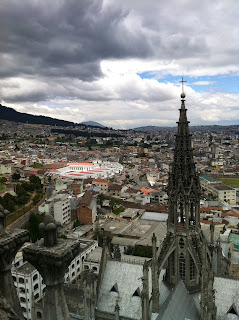 Crossing to the spire- that's the fan vaulted roof of the nave you can see: 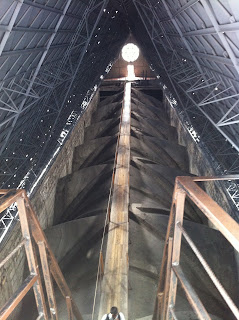 View of the clock towers from the spire- we climbed to pretty much the very top of the tower on the left, about where the photo gets cut off: 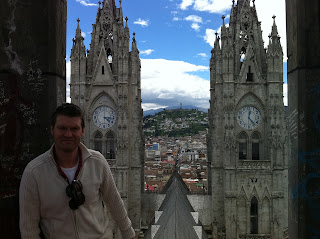 We were followed everywhere by a large group of Mormans, none of whom tried to convert us. Which was nice. 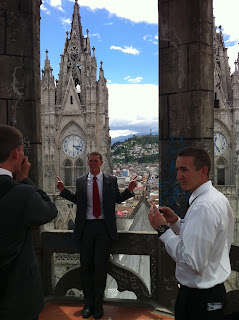 After this excitement, we headed down to the Plaza Independencia and Plaza San Francisco, went into a couple more churches (the Centro is full of them as it used to be pretty much one giant convent) and just wandered around, taking in the sights.
Plaza Independencia- if you click on the link further up the page, you'll see the same photo taken from a film-based camera more than 7 years ago: 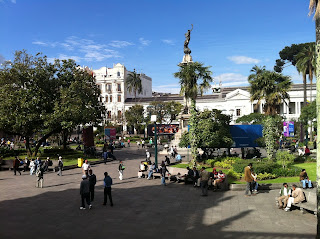 The Centro Historico is gorgeous: 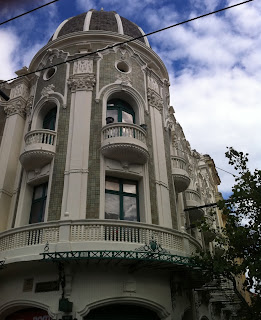 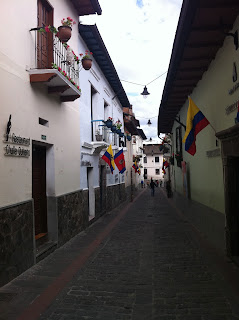 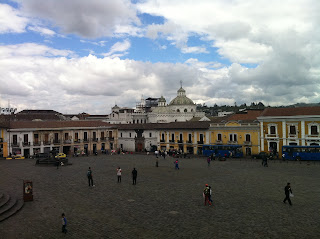 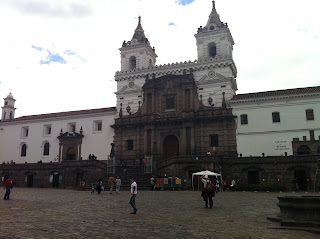 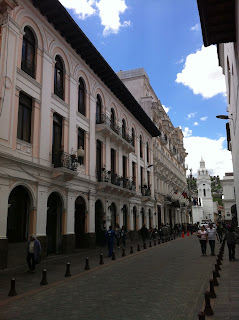 View from the hotel in Guapulo, Quito: 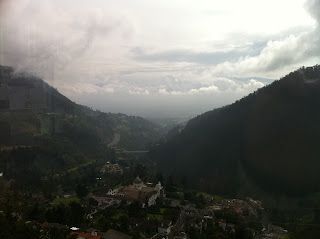 We went for dinner at Zazu, a fancy-pants Peruvian restaurant. It was very good, but over-priced at US$50 per person, without wine...They had the biggest roses I've ever seen in the entrance, 6 feet tall: 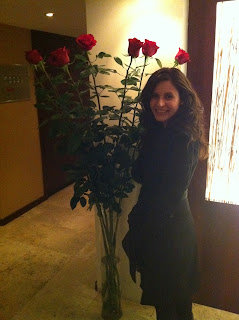 We also headed off to Banos for the weekend, a 3 hour drive from Quito. Banos itself is a pretty crappy little town, but it’s the countryside around that is the attraction. It’s kind of like the Elqui Valley, in that it feels as if the mountains are right on top of you, but, unlike Elqui, it’s pure green scenery with lots of small waterfalls. If you’re into adventure sports, it’s a great place to go to. I like that kind of thing, but we didn’t have all that much time, so we just ate and drank a lot and drove along the road out of town, taking in the views and hiking the short distance to El Pailon del Diablo, the largest falls in the area. It’s a beautiful part of the country.
I can't remember the name of this fruit, but it looks like a giant pea-pod. The fruit inside is like eating a slightly sweetened cotton swab. As nice as it sounds. 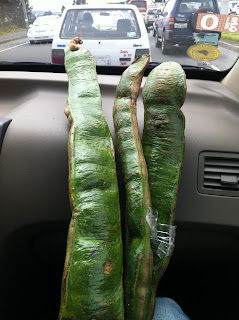 Hotel in Banos- the house was beautiful, the hotel part of it, not so much: 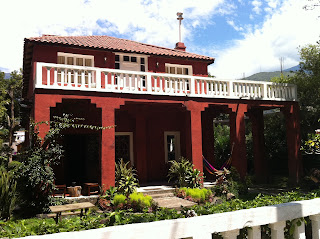 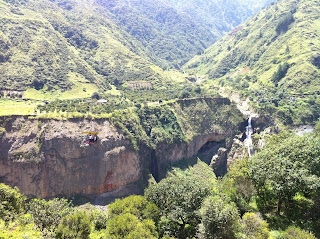 Me, spoiling the view: 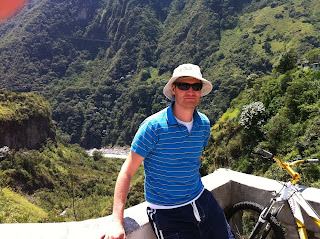 El Pailon del Diablo- it was tricky getting a decent photo of it, so here's one of me: 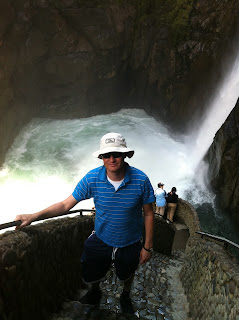 Other things I like about Ecuador would be the food and the people. Ecuadorian food is fantastic, a mix of tropical and Andean and so much of it is fried, which makes almost everything taste better. The beef is pretty awful, but the chicken and pork (and goat) are amazing. I ate too much. And I drank a lot of tomate de arbol juice, which was always my favourite flavour. I smuggled back some tomate de arbol seeds as well, so hopefully I’ll be producing my own in a couple of years.
Mmmm, seco de chivo (that's goat): 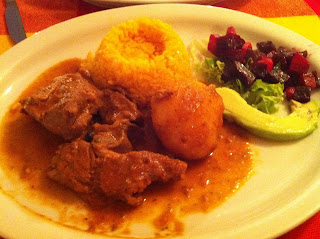 Also, Ecuadorian people are really friendly- everyone smiles when you walk into a shop and they’re almost always helpful and courteous in any situation. This is another thing Chile could learn from Ecuador.

On the flip side, Chile has Ecuador beaten in quite a few other, important ways. Ecuador has a serious crime problem with lots of gun and knife crime. La Mariscal is a den of thieves and the Centro Historico is really bad after nightfall. You do have to be careful as a tourist and, to live in Quito, you have to make some major changes to the way you live your life. The roads are a mess with pot holes everywhere, dangerous sign-posting and some of the world’s worst drivers. Corruption at every level is rife. It’s for these reasons why I think Chile is such a great place to live. You don’t have to change your way of life in Chile. A few small adjustments here and there, maybe, but not major concessions and compromises. Chile is a really livable country and Ecuador, for me, just isn’t. It can sometimes be easy to forget the advantages Chile has. A few days in one of the other South American countries tends to remind you.

So, I’m now back in Colchagua and enjoying the Summer again. It seems to have cooled off a little after 3 weeks of serious heat. I’ve got a busy couple of weeks coming up with clients and other projects so it’d be nice to have some cooler (but still sunny) weather for a while. Tomorrow, I’m hiking up what would be considered a mountain in England with clients to visit this amazing property in Colchagua Valley. The clients will be on horses, but my back problems mean I can’t ride. I prefer the exercise anyway and after a week at altitude, it should be an easy stroll. Maybe.

Quito is a great city...did you go up the teleferico to the base of the Volcano? They have quite the infrastructure up there, could handle thousands of tourists...but its almost completely abandoned. Sad. But great view of the city below. and an oxygen bar!

The centro historico is amazing, the rest of the city is a dump though. I didn't make it to the teleferico this time, I only had a couple of days. Hopefully next visit.

You got a really useful blog I have been here reading for about an hour. I am a newbie and your success is very much an inspiration for me.

Great stuff here. The information and the detail were just perfect. I think that your perspective is deep, its just well thought out and really fantastic to see someone who knows how to put these thoughts down so well. Great job on this.