I'm Sure This Should Be Considered Offensive...

...a clothes shop for larger than average people called "Little Fatties".
I'm really not sure why, in the Spanish language, it's considered appropriate to be so rude about people's appearance...but it is...and it's the same in every Spanish speaking country I've been to. 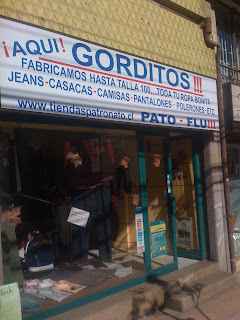 i think i saw this store the other day¡ i didnt take note of the name though, the display caught my eye first but its too dark to tell if its the same one.

then again, i suppose its not rude if nobody on the other end thinks it is. awefully un-pc in my opinion though, and getting called gordita has driven me nuts at times.

I'm really not sure why, in the English language it's considered appropriate to be so hypocritical about people's appearance.

Don't forget that "gordito" is a term of endearment, as is "chanchito"!!

It's more because they aren't hypocritical or insecure and have the ability to laugh at themselves. It's something that would be perceived as a sign of weakness over here, whereas in fact the weak are those that live in fear or constrained by what "others will think" about them.

Remember that in any case, as far as teasing goes, they dish out as much as they receive. It's alltogether very healthy and gets people out of their shell.

Yeah I've heard over and over again the 'it's a term of endearment' excuse for offensive name calling...fact is, when I've asked bald, fat, Chinese or black people if they enjoy having their physical characteristics constantly pointed out the answer has been 'no' 9 times out of 10. Just because something is culturally acceptable, it doesn't mean it's not rude or offensive to the people on the receiving end.

I prefer this Chilean custom to the American one where we must obviously ignore things like that. But this may be because I'm not bald.

I think pc-ness, while acceptable for educated people in some situations, like, calling a person from Thailand "tailandesa"/"Thai" instead of "china"/"Chinese", in other situations is just fake. I feel like it inhibits Americans from really expressing what they feel and in the U.S., issues like "homosexuality" are just not touched in the company of rednecks or superchristians, for example. Joking about something, like someone being homosexual, is a way of at least accepting that it exists, if not totally accepting it. (I run into lots of Chileans that joke about their friends', coworkers', etc. sexual orientation.)

I don't think there's a perfect solution and both ways of dealing with "what shouldn't be said" have their flaws. But, on a whole, I prefer the Chilean system. But I'm from Minnesota, where I think you have to be extra-"pc", so I may be on pc overload.

Is that on Arlegui in Vina? I used to walk past that store all the time and chuckle. And i don't think its that offensive if you're in a culture where being gordit@ isn't necessarily a bad thing. Its just like having brown hair, or big ears.
Just happened upon your blog today and am really enjoying it. :)
-Jenny

Yep- that's the place, on Arlegui. Thanks for your comment!