You might want to have a look at this post I wrote a few months ago about Plaza Sotomayor. The building you see with the tower was originally built in 1833 and used as Customs' House. In 1856 it was taken over and used as the Intendencia before being knocked down and replaced, in 1910, by the French style palace that still stands today (which was also the Intendencia before the Navy kicked out the council in the 1970s). 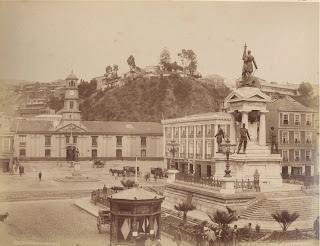 As I've mentioned before, the new Plaza Sotomayor project was recently cancelled, indefinitely it would seem. The remodelled Plaza should have been finished a couple of months ago. Yes, really. Instead, the council decided it would be better to cancel the approved plans and undertake another study as to the feasibility of renovating Valpo's main square. Then, once the study is finished, they'll set up another competition to design the Plaza. My guess is that the work will start around 3050.
Posted by Matt at 14:31

you know that museum in the plaza? that you can see the little stairway that leads underground... i always imagined this expansive secret underground museum full of corridors expanding beneath the entiere plaza... haha.

you're giving them too much credit on the estimated year :) over and over i see things go through that same winning of the project process, delay delay delay, start over and hold another competition for the design or project... etc.. .and in the end usually nothing yet. the design in your previous post doesnt even look THAT different...they didn't even fix the chaotic traffic, but just made the plaza look a little more like av. brasil!

Yeah, it looks kind of interesting until you get down there and it's just a pokey little gift shop with a chunk of wood on display.

And yes, it's incredibly frustrating to see the constant delays to projects that could really improve this city. Valpo's council is probably one of the worst in the entire country - backward thinking, incompetent and corrupt. Throw in the dozens of other interest groups which are constantly bickering amongst themselves, complaining about everything and you've got a city with huge potential that is simply stagnating. It's painful to watch.