Interested in purchasing a vineyard in Chile? Please visit Chile Investments and we will be happy to assist. 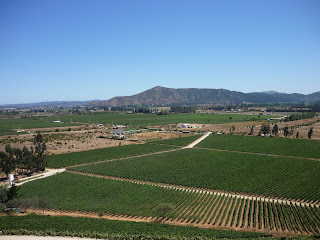 At the beginning of February, Michael, a fellow Englishman, from Wine Tours Valparaiso called and asked if he knew anyone who spoke English and who wanted to spend a few days taking tour groups out to the vineyards in the Casablanca Valley, between Valpo and Santiago. I'd met Michael when my Dad came out to visit and had taken a very well received tour with him. I've been at a bit of a loose end since January with work being slow (it's picking up again, thankfully) and waiting on a couple of things so I said I'd help out. I'm glad I did as I had a really fun time. What I was waiting on was to get my website for my consultancy for foreign investors in real estate in Chile (vineyards, fruit farms, residential and commercial property).

I took one group of 10 out to Veramonte and Viña Mar. Both vineyards gave interesting tours and tastings, the latter probably more so than the former. But Veramonte was extremely accomodating when I arrived 45 minutes early after a minor mix up so hats off to them.

I then took two private tours out in my car. First off was a couple that I took to William Cole and then to Emiliana. I really liked both vineyards, especially Emiliana. This is an organic vineyard owned by the Concha y Toro empire. I'm really impressed that they've allowed this organic offshoot to flourish. They now have over 600 hectares in various parts of the country given over to purely organic farming. The tour explains how the land is farmed, organic techniques and finishes, obviously, with the tasting. From the Casablanca Valley, we went on a quick trip to La Moneda and then up Cerro San Cristobal in Santiago and then to the airport. A pretty great way to spend a last day in Chile.

Next, I took a couple of Emiliana and then to Indomita. I was slightly unimpressed by Indomita. They've got a stunning location but the tour was not that great and a friend has had several bad experiences with them. I think they're trying to up their game but out of the vineyards I've visited in Casablanca and down in Colchagua on a personal trip, Indomita offers the worst tour.
*EDIT: I've been back to Indomita a few times now and they've really improved the tour. It's now well worth the trip, although I still really hate the building and the security check point as you drive in is not a great first impression.

I'm generally pretty down on the way tourism is managed here in Chile. It's usually pretty awful. However, the vineyards have really got their acts together and I've been very impressed with them both in Casablanca and down in Colchagua. They're some of the best run operations I've come across in Chile.
Then, a couple of weeks ago, a friend was visiting with her daughter so I offered to give them a lift to Santiago and a quick vineyard tour. So we went back to Emiliana. Kellye was kind enough to buy me a bottle of Emiliana's signature wine, Ge, a wine that is way beyond my maximum wine budget. I drank it with friends overlooking the sea and eating chocolate truffles. It was a thoroughly enjoyable drop. 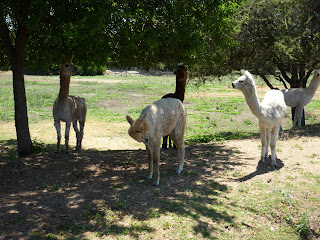 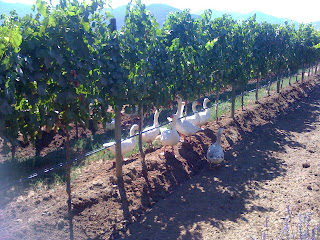 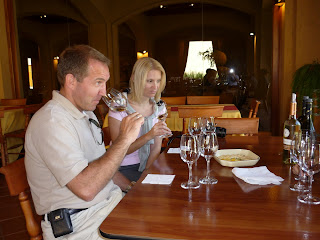 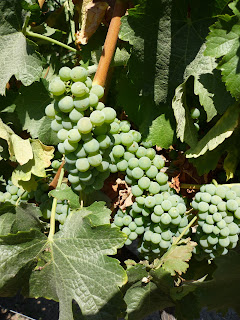 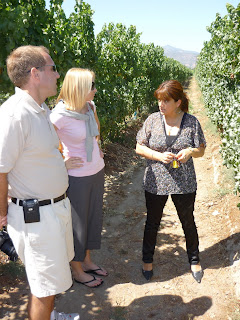 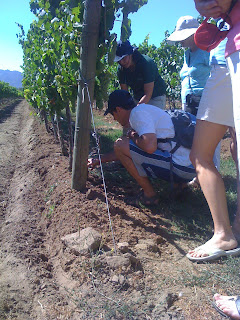 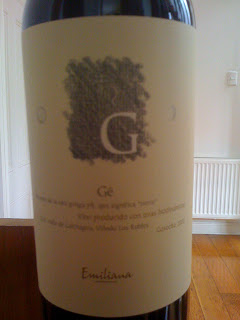 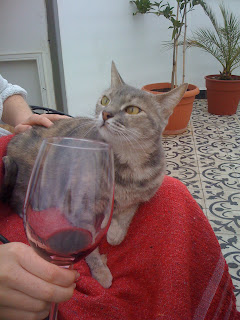 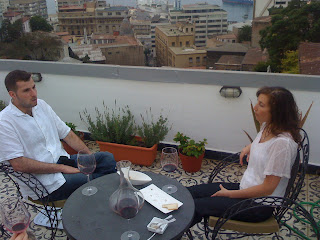 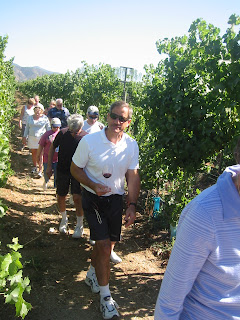 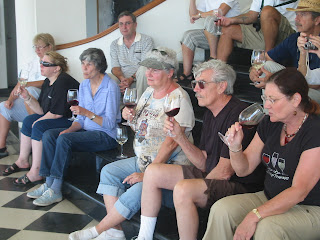 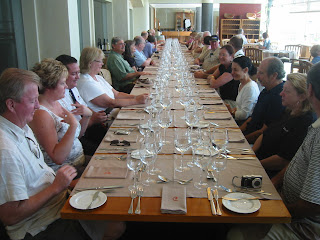 Labels: About, Images of Chile, tourism

Gosh, those ARE nice words!

Great vineyard tips. I've obviously driven past those wineries quite a few times, but I've never stopped at any of them and don't know how their tours compare to others around Chile. Did you have a favorite, or were they all different enough that each had its own charm?

I like your shameless SEO section - it beats writing unnatural sentences just to incorporate keywords!

I think the Emiliana organic tour is probably the most interesting, plus the girl who takes the tour is really fun and pretty knowledgeable. Apparently the Casas del Bosque tour is also really good but I haven't had the chance to go there just yet.

Probably the best wine tour I've done in Chile was at Vina Santa Cruz down in Colchagua. It's the vineyard owned by the Cluster Bomb King, Carlos Cardoen. He's the guy that single-handedly resurrected Santa Cruz and developed the Ruta del Vino. Very impressive stuff and it's good he's using his ill-gotten gains for something good.

I'd also driven past on ruta 68 dozens and dozens of times over the past 5 years and never been to any of the vineyards so I'm glad this opportunity came up...it's a lot of fun taking the tours and meeting new people.

Good to know. I've been to the museum and hotel in Santa Cruz (only for a coffee at the hotel, I was a poor exchange student at the time!) but not to that vineyard. I may have to suggest a slight detour to check it out next time we're visiting family in Curico.

Going to the organic vineyard sounds like fun! Actually maybe I'll go check it out and write a post for one of the green blogs I write for.

The vineyard wedding that I shot was actually at Vina Indomita and I have to say that the event was run impeccably. So maybe they were just have an off day when you were there.

We had a fantastic tour at Indomita. Our guide was knowledgeable and fun. And the lunch before hand, superb!! Emiliana also had a great tour with lots of live stock on display. Our guide while less knowledgeable was able to sneak us a few extra samples which were much appreciated. I must say that Casablanca was a great stop and so much fun. Get good directions and a private car before you head out, and be prepared for a fabulous time!

Thanks for the comment. I've actually gone back and edited the post-the Indomita tour is much improved and definitely recommendable. Happy to hear you had such a good time!

Its important to note that this month on April 25th the casablanca valley will have its first grape harvest festival taking place in the Casablanca town square.

It will start at 11:00am and will include an inaugoration, folk music, traditional food, above all wine tastings from all of the vineyards in the valley, ending at 22:00.

For more info on the event and how to get there contact michael@winetoursvalparaiso.cl
or call 08 428 3502.

Thank you for posting this. This blog was really helpful and informational!!'d like to thank you for your efforts you've got made in composing this post.

I really enjoyed reading this post, big fan. Keep up the good work and please tell me when can you publish more articles or where can I read more on the subject?