On Wednesday I had to go to Santiago. Longer term readers of this blog may remember that I detest Santiago. Unfortunately, I've had to make quite a few days trips in the last couple of months to deal with tedious business stuff-signing papers, paying bills and other fascinating activities.

This time, I had a couple of hours to kill in La Zona Prohibida, otherwise known as Santiago Centro. Now, on a Sunday, this part of town is really quite nice as it has some beautiful architecture, plazas and interesting streets to wander around. On a week day at 2pm, it is the inner circle of hell.

However, I took advantage of my spare time to visit a couple of museums on and just off the Plaza de Armas. Firstly I went to La Casa Colorada, which charts some of the history Santiago. It's an interesting but small museum with some entertainingly rubbish diaramas. Well worth the 500 pesos entry. Right now there's an exhibition on by a painter called Paula Nosequien who painted a series of works based on interviews with families who lost relatives during the military dictatorship. I really didn't like the majority of them but two really struck me. 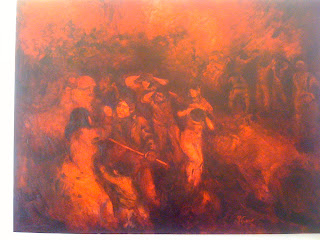 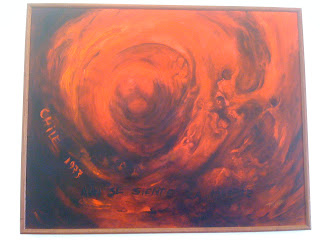 After this I headed to the Museo Histórico Nacional, a larger and more detailed history of Santiago and Chile. I didn't have a great deal of time at this point but next time I have time to kill in Santiasco I might head back there.

When I'd left Valpo in the morning it was raining (very odd for this time of year) and it was cloudy and misty until reaching the other side of Tunel lo Prado and arriving in the bowl of Santiago. It was then hot all day and when I finally left around 5pm I encountered the mist and crappy weather again as I drove back out through the same tunnel. Here's a photo of the bank of cloud waiting for me. I think I've mentioned this before but I really can't recommend taking photos as you drive. 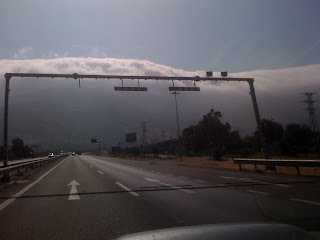 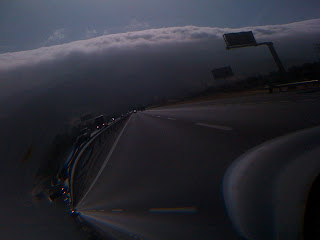 Interesante...lately I've been doing a little reading of Pinochet's rise to power and those dark days that followed...not a pretty picture.

Speaking of pic's...those last two you took returning to Valpo...I reckon we could call those a drive by shooting. :):):)

From a Chileno living in Detroit, Michigan.

Matt, I´ve found your blog looking for information of how to invest in Chile very weird but nice because I have laugh a lot with your comments about my country and culture.

Just for your knowledge my family use to live in Valparaiso in the early 1900´s and then they moved to Viña and Santiago where they live now. I also lived in Valparaiso as a "student" in the white building that is in Playa Ancha near the Santiago Wanderers Stadium. In our early morning "jogging" through the Playa Ancha hills we had the chance to see every corner and details of the hills, the charm and potential of the city.

From the distance my dream of Valparaiso is seeing the city as a small research town, just like Nimes in France, with small and hightech centers all over the city, laboratories, branches of the CERN, JPL, Du Pont product development departments, etc; where people from all over the world can develop new things. But not get me wrong please not the huge centers that we can find here in the US just something that adjust to the scale of Valparaiso.

About our culture remember that we have been isolated from the world for at least 300 years with the Andes in the east, the very dry dessert to the north and very far away from the main commercial routes of the 1800´s and 1900´s it was also the poorest province of the Spanish Empire. So we, chileans, never got a chance to compete against the big players of the time (Germany, France, Britain, US, Japan, etc). Now things are changing hopefully we´ll get a chance in the near future.

Well I´m writing this message to give you and all the foreigners that live in Valparaiso and Chile ,in general, Thanks for all the efforts that you are doing to make our cities a better place to live in. Hopefully when you return to Great Britain you can take a positive view of our country and convince more people to come.

PS: for the United Stateans I have to say that Michigan is beautifull is very similar to the south of Chile without the Andes of course and I still prefer Nescafe to the "sock water" called Americano.

Pancho- I really agree with your idea for Valpo as a research town. It's kind of perfect for it, less than two hours from Santiago, massive university population and a port as well. There have been half hearted CORFO attempts to attract technology companies to the area but until these companies are given tax breaks for moving outside of Santiago it'll never happen unfortunately. Decentralisation is key for places like Valpo and Vina and other towns...if people are going to move away from Santiago, they need jobs...

And yes, Chile has long been isolated and has always been behind the times when it comes to fashion, culture and forward thinking ideas. This is not a criticism at all as there was very little the country could have done to change this due to its geographic position...hopefully, Chile will catch up a bit quicker over the next few years.

Pancho, I'm a United Statean from Michigan and now I live in Chile. Looks like our destinies somehow got swapped. :) Every time I go down to the South of Chile I feel very nostalgic for my child because of the similarities!

Interesting coincidence the world is smaller than we think, is the tipical phrase.

I live in suburbia Detroit, not in Detroit itself as you know Detroit is a city that looks like somebody have thrown 2 H-bombs one in the surface of the city and one 8 km up in the sky destroying whatever is possible, I´believe if the Marquis du Cadillac resurrect from the dead he would be fulminated by a heart attack just like Valdivia or O´higgins if they go back to some neighbourhoods of my beloved capital.

As you might know Michigan now is -5 degrees celsius, the forests are completely covered by the snow, the shores of the lakes are starting to get covered by ice, the street are full of decorative lights and yes the deer hunting season is ready to start, they also hunt Bears with ultra-super duper-looper hight tech weapons very strange I can say.

I´ve been living here for a year now, but I´m still amazed that there isn´t any mountains in the midwest is completely flat for a chilean that is completely nonsense. The western shore of your state is amazing the vineyards in the North (Traverse city), the forests in upper peninsula Mackinnac Island and the cool places like Sagautack, Ann Arbor (UoM), the eastern shore is much more industrial though.