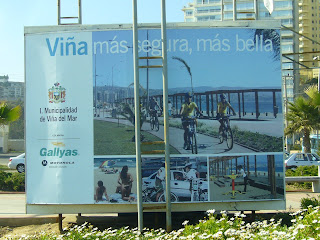 Viña has money and it shows. It's generally very safe, there are litter bins everywhere, the roads and pavements don't have potholes so big you could lose the QE2 in them, the two malls are usually packed and offer decent shopping, there are hardly any stray dogs (meaning there's hardly any dog shit) and there's a whole load of new private construction developments under way (and many more that have already been finished).

This is partly how the council gets the funding to undertake public works such as the new promenade that stretches the entire length of the beach, complete with cycle paths, exercise areas and sculptures (the council gets a % of the total cost of any construction project that goes through planning-I think it's 1.5%. It also helps if a corrupt mayor didn't leave you us$30 million in debt as happened in Valpo a few years ago). 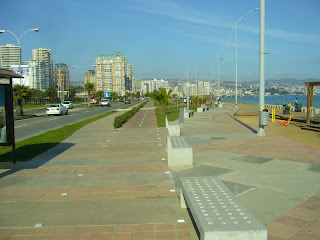 The problem is, of course, is that Viña has lost its soul. This is most likely what a lot of Chileans like about it-it's clean, shiny and new. Yuppie Yey. 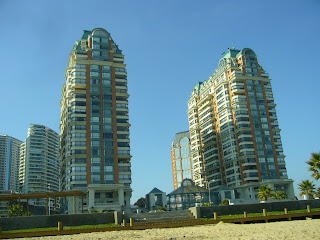 But the city is losing its heritage. It's becoming a high-rise hell. Summer is a total nightmare as there are so many people in the city. More new apartments attract ever more people, straining the city's infrastructure.

Despite all this, I actually like Viña more than I used to. Out of the summer silly season, it's a pretty and relaxed beach side city. It's got better shopping that Valpo and I must admit it's nice to be able to walk down a street without having to worry about looking out for bottomless pits that I might fall into. 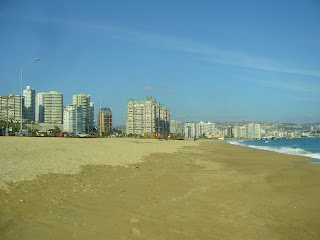 But I still prefer Valparaiso and always will. It's got something Viña will never be able to recover: Charm and soul.

And Viña floods as badly as Valpo in the winter rains. Ha! 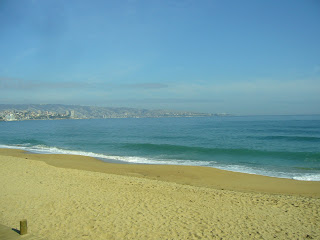 I love Valpo too. I always thought (and think) that Vina is like East Santiago with beaches. The same posh people, the same boring style of life. Valpo, in spite of the bad things you pointed out, has way more charm and soul...
good to know you still prefer a Pancho!

I'll always prefer Valpo. Vina has its benefits and even charms but it's not what I'm looking for in life...

You sure that Viña isn't comparing itself to Valparaíso with it's "más segura más bella" slogan? It's other recent similar slogan is "Viña más linda más limpia" I totally agree with you about Vina's soulessness in terms of the area around the mall but I think the calle Valparaíso area (i.e. viña’s old downtown) is pretty cool.

Hmmm...it's certainly possible that Vina is comparing itself to Valpo but I get the impression that Vina doesn't even see Valpo as any kind of 'competition' and so it wouldn't even cross people's minds to put the two in a side by side comparison.