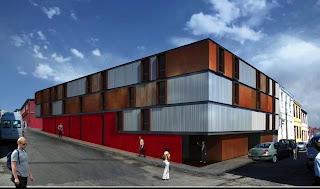 For anyone who's read this blog for a while or who knows me in real life, this won't come as a shock: I'm a capitalist pig who loves money, exploiting the poor and pie. But even evil-doers such as myself can see when someone is simply taking the piss. And that's what's happening right now on Cerro Concepcion: Someone is taking the piss out of everyone who lives here.

Now the local residents' association and I agree on some things and disagree on others. They want nothing at all to change on the hill whereas I'm generally in favour of new restaurants, boutique hotels, cafes and boutiques. I'm also in favour of old properties that are in terminal decline and pose fire and other risks being converted into loft apartments and offices. This is the way to attract new investment in the city, new life and new residents. It won't happen overnight but I believe it's the way forward as this city desperately needs investment and it won't get any from a public source.

But I truly don't believe that there's space for a 43 room hotel on Cerro Concepcion, particularly one that insults the architectural heritage of this neighbourhood. Enough mistakes have been made like this already. This hotel will put a massive strain on the infrastructure of the Cerro. It's just too cramped up here to support a hotel of this scale. For those of you that know the area, the proposed site is on the former carpark on the corner of Abtao and Templeman.

The area of the city for which this project would be perfect is, quite obviously, Barrio Puerto. This is a neighbourhood that needs revitalising. The design of the hotel (which actually gets easier on the eye the more you look at it but is not suitable for the cerros) would fit in much better down there. It could be even bigger than 43 rooms. It could be a part of the regeneration of a really run down neighbourhood. There are possible sites in Calles Serrano and Cochrane.

Hell, even a little further up on Cerro Alegre would be more suitable for a project this size, where there's more space and everything's a little less constricted. But Cerro Concepcion is simply not the place for this hotel. This is something the Junta de Vecinos and I can completely agree on. 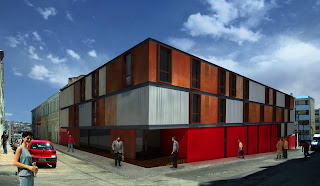 ...how long exactly have you been looking at that picture that it seems to get easier on the eye? ...i'm not buyin it- thats ugly, for anywhere. but yeah it seems like your suggested locations would be a lot better and its proposed location is not a good fit.

i did read an article in one of the papers the other day about a bunch of investments they're doing in concepcion as far as the lighting and streets in an effort to reward the private investors and promote tourism in the area.
but this seems like it has an opposite agenda.

Well it took me a while to appreciate the design. Once I realised that i didn't like it because it's just so damn out of place-architecturally and size wise-I was able to see what the architects were thinking. It's obviously designed to look like shipping containers and I think that's an interesting and bold move but it needs to be somewhere else. Barrio Puerto is the obvious choice as it's an area where a large hotel would fit in. The design would also work well in that neighbourhood.

The lighting and street improvements have been on the agenda for over 2 years and nothing's happened so far. They were originally part of Valpo Mio, then that died a death and was incorporated into a new organisation. They've got us$80 million of BID money to spend and so far they've spent none of it. Calle Serrano was paid for by UNESCO. Plaza Sotomayor is 6 months behind schedule and no start date looks likely. There are a bunch of other projects that are supposed to get done as well but the only thing they do well in Valpo are surveys (including surveys to see whether it's worth doing a survey. I kid you not).

Kacy-it really does grow on you (my initial reaction was 'fuck me that's hideous') but as i've said, it looks horrible because it's so out of place.

But now, who the feck could come up with such a shite? Isn't that Bier fella,...or is he? who could like a pile of containers dunped in Cerro Concepción is beyond me! ...my commiserations Valparaíso, really...

Haha, no it's not Bier...the architects are REI Arquitectos (Ricardo Posada Mery, Eugenia Soto Cellino and Iñaki Volante Negueruela). I can't find any website or information about them at all...

...it's actually worst than this picture. the "junta de vecinos" made a revision of the building plans and the picture is a fake, you have to add a floor.